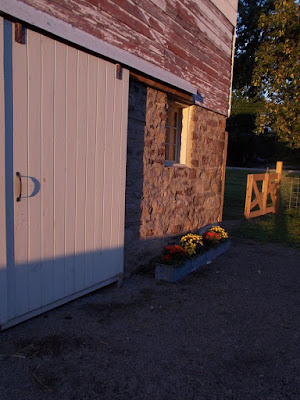 To quote from a book by Eric Sloane, “You can seldom explain likes or dislikes”, but I have always been attracted to structures made of stone.  Stone houses, stone fences, stone bridges.  Nearly 20 years ago when I purchased the property, it was natural that I name our modest 10 acres with a stone foundation bank barn on Stone Road, “Stone Hollow Farm”.   The land gently slopes from the high point of the Ridge Road down to the hollow where a tributary of Jeddo Creek flows. The barn and front paddock are cradled on the east side of road and show off like a jewel when approached from any direction. I often tell people I bought the property because of the barn.

Our area of Western New York is known for its stone construction.  Early land owners cleared their fields for plowing and harvested the small lake rocks, “cobblestones” left behind by the glacier that crept and melted to fill the basin that was to become Lake Ontario.  If you have ever spent time clearing rocks from a field or have had the tremendous displeasure of trying to dislodge a stone buried right were you wanted a fence post to go, you will appreciate the dedication it must take to collect enough to build a house from. A leisurely Sunday drive east on the Ridge Road towards Rochester will provide a visual feast of cobblestone structures.  The cobblestone museum in Childs NY is a treasure trove of information and can be enjoyed after a pleasant brunch at the Village Inn, located a stone’s throw from the museum grounds (pun intended).

While I find cobblestones lovely, my favorite has always been cut and field stone buildings.  Our main barn on the farm has a field stone foundation.  The walls are an intricate puzzle that the original builder pieced together using large field rocks from the property, some the size of small boulders.  They fit together leaving a fairly smooth face with colors of several different rock types and joined with cement heavy with lime.  Several years ago, a barn historian told me our barn was a “show barn” based on some of the building materials and its impressive height of 40’.  While I love how if  standing at ground level you have to sweep your head back with your chin up in the air to appreciate how tall it is, I most love how the stone walls are such a pleasant backdrop for the sturdy barn doors and nine pane windows.

It would have been hard to grow up here and not have an appreciation for stone.  The Town of Hartland is just a few miles, as the crow flies, from the shores of Lake Ontario.  In other places of the world you go to the shore to collect shells. Here we collect stones. The Canadian side of the lake is mostly sand, but the shore of the American side is covered with small stones made silky smooth by the lapping of the waves.  I was blessed to have an Aunt and Uncle who owned a cottage there and spent much time in the summer walking the quiet shoreline.  The stones you find at the very edge of where the waves stretch and then retreat are turned into brilliant gems when they are washed by the water and left to glisten in the light.  As a child, all their sizes and colors made it impossible for me to ignore. There was also the challenge of having to walk over the stones with tender young feet to reach the water for a swim.  There was no such thing as swim shoes in those days.  You were just expected to tough it out.  The biggest struggle was the decision to either endure the discomfort of your feet for the next ten to fifteen feet until you reached the sand bar, or belly flop into the frigid water and gasp for breath until your body adjusted to the temperature.  The stones left an impression and each visit meant collecting at random and then sorting through and taking the best specimens home, as many as my parents thought appropriate.  I don’t think I have outgrown my first love.

Several years ago I was asked by a cousin who lived out of town to help coordinate a surprise party for my Aunt Pat’s 80th birthday.  My Aunt stilled lived locally and she needed someone to meet with the owners of the venue, find a cake decorator and plan the decorations.  I wanted the centerpieces for the tables to evoke memories and serve as a topic of conversation.  I asked my cousin to send a disc of old family photos which I printed out on tracing paper and glued in a Triptych of glassless frames to house a candle.  The effect was beautiful and rendered the emotion I was hoping for from the guests the afternoon of the party.  What surprised me though was the reaction the bases of the centerpieces created.  I spent several hours during the weeks before the party with my friend Vickie at the shore collecting small rocks.  I washed them and gave them a coat of sealer to create the affect the water has on them.  The stones were used to surround the picture frames on a base in the center of each table. A handful of stones on each centerpiece had words pasted on them like, “family”, “love”…etc.  The lake stones were just as talked about as the old photos illuminated by candlelight.  After the party I discovered that the stones were gone.  My cousins had taken them home.  At first I was disappointed.  I had planned to keep them myself. Then it dawned on me that they had spent their childhood collecting rocks at the lake too and it was like taking a piece of “home” home.  I have wondered how   Security at the airport must have reacted to all the rocks, but I suppose they have seen everything.

I keep stones as my traveling companions.  They sit in a cubby on the dash of my truck in plain view like old friends.  One was given to me by my friend Arthur who saved it for me from a trip he took to Wales.  It is round and cream colored with a hint of green.  I never had a green rock before.  The other was painted by my friend Sandy to look like a lady bug.  I am not sure how or why they ended up as my travel buddies.  I thought about taking them out a few times but decided we all feel at home together in my truck.

I started this blog with the thought that we can seldom explain our likes or dislikes but maybe that’s not true.  I think I may have gotten to the bottom of why I love stone structures.  I will even confess that once after a trip I hugged my stone barn before walking through the doors again for the first time. There is a sense of grounding I get from stone structures, a sense of permanence and peace. What resonates with you?

Posted by Jeanna of Stone Hollow at 2:00 PM